First, let me thank you for writing me a story in one of the fandoms we share. I'm excited about all of them. They're listed in alphabetical order, so as not to play favourites.


( Collapse ) This entry was originally posted at https://greerwatson.dreamwidth.org/109312.html. Please comment there using OpenID.

I've just put in my nominations for the

I feared that last year would be the end of FK's eligibility. In fact, we now stand at 976 fic spread over AO3 and FF.net, which means we are still (barely!) under the cut-off. I guess there were fewer personal sites discontinued this year.

Anyway, I nominated Nick, Schanke, Vachon, and LaCroix. If any other FK fans are doing Yuletide this year, do please consider adding more characters to the tagset. Sadly, one is only allowed four per fandom, and there are so many fascinating people in the FK cast.

YOU CAN NOMINATE HERE.

There are so many missing characters! The absence of women is particularly obvious. If you do decide to nominate, please comment here or on the mailing list so that people can coordinate. This entry was originally posted at https://greerwatson.dreamwidth.org/109286.html. Please comment there using OpenID.

First, let me thank you for writing me a story in one of the fandoms we share. I'm excited about all of them. (They're listed in alphabetical order, so as not to play favourites.) I should also say up front that I'm easy on getting either a trick or a treat.


( Collapse ) This entry was originally posted at https://greerwatson.dreamwidth.org/108889.html. Please comment there using OpenID.

sunshine_challenge may be over, but—looking over what I've written on the colours—I find I still have a bit more to say.

In the last post, on VIOLET, I took colours beyond the spectrum and round the colour wheel, finishing up where it all started, i.e. with RED. However, I had the devil of a job doing that last bit:

Although the end points were fixed (and I knew that #FF00FF needed to be in the middle), I kept fiddling with the hex codes, tweaking them over and over in an attempt to get a smooth set of transitions. Even now, I'm not satisfied.

Thinking about it after the fact, though, I think I've put my finger on the problem. Something

It's interesting - when I imagine the platonic examples of colors (which usually involves a crayon box), almost all of the shades of the Newtonian spectrum are dark, with the exception of yellow,[...].

I grew up with a set of basic colours that were essentially derived from the subtractive primaries. Oh, there was RED (instead of magenta + yellow) and BLUE (instead of magenta + cyan); but, as one mixed more paints together, things got darker. People who think in terms of additive primaries—originally scientists in Optics, but nowadays particularly people dealing with computers—are accustomed to having colours get lighter as they're added together.

What this means in practice is that, instead of the sequence above, I ought to find it easier to get a gradation by using dark shades.

( Collapse ) This entry was originally posted at https://greerwatson.dreamwidth.org/108595.html. Please comment there using OpenID.

With violet we come to the last hue in the visible spectrum, which is to say:

(Which was named for the colour of the flowers of Viola odorata.)

To me, violet is a shade of PURPLE. That is to say, "purple" is one of the basic colour words in English; and the word refers to a broad range of colours in the same way that BLUE, RED, YELLOW, and GREEN do—though PURPLE is not quite as basic a colour as those, being more on a par with ORANGE and TURQUOISE.

I would not, however, say that violet is focal PURPLE, i.e. the most perfect, ideal shade of PURPLE. That, to me, is a shade slightly more to the BLUE end of the spectrum:

Or, to put it another way, the perfect shade of PURPLE lies between indigo and violet: indigo is the colour transitional between PURPLE and BLUE; and violet lies at the far end of the spectrum. (Beyond that lies ultraviolet, which can't be seen by the human eye.)

( Collapse ) This entry was originally posted at https://greerwatson.dreamwidth.org/108327.html. Please comment there using OpenID.

Well, the plant produces a blue-purple dye; and the colour is usually described as lying between blue and purple. So what's that?

Some might call this simply BLUE, especially if it presented in contrast with YELLOW, RED, and GREEN:

If, however, we compare it with BLUE and PURPLE (what I think of a a perfect PURPLE), then we can see it lies in between:

So now we come to BLUE proper. To me, this is inherently a dark colour—though, of course, there are plenty of shades of blue from midnight to ice. It's the colour most associated with sapphires and delphiniums (though both come in quite different hues as well); and it's the colour of those little blue squill, Scilla sibirica, that are so commonly massed under shrubs in flower beds in the spring.

One association of blue is with the police; and one of my favourite fandoms, Forever Knight, is a cop show as well as a vampire show. Although Nick Knight himself is a plainclothes detective, there are uniformed officers in the police station in every episode; and they, of course, wear blue: 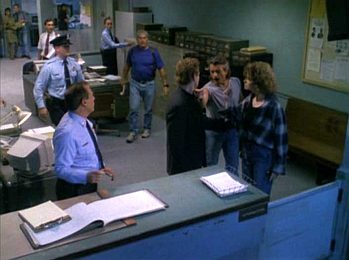 In 2011, I wrote a story about Nick's first day in Homicide. "The New Guy" was written for

fkficfest. The story was originally posted to LiveJournal (where the exchange was then run) and later crossposted to AO3 and my website.

The plot of "The New Guy" is based on the flashback to a Season 1 episode, "Only the Lonely", which tells how he first met Natalie Lambert. It is canon, therefore, that he was brought into the morgue in a bodybag, having been blown up by a pipe bomb while trying to stop a robbery. Then, being a vampire, he regenerated on the autopsy table. To her great astonishment, of course; but she was intrigued enough to offer to research his condition in the hope of finding a way for him to turn mortal again.

At that time, Nick was not yet a police officer. (Or, at least, not in Toronto. Another flashback told us about his time as a uniformed cop in Chicago in the 1960s.) It was sometime thereafter that he contrived to join the Metro Toronto Police and get immediately assigned to work Homicide at the 27th Precinct.

Since "The New Guy" was about Nick as a policeman, I decided to go with a plain blue background, and bordered the central story panel with a textured blue and black border picked out in gold. I used a police badge in various sizes as a divider between the sections: this was clipped from a screencap. Admittedly, it was a close-up of Det. Schanke's ID. (He was Nick's partner in Seasons 1 & 2.) But Nick's would have looked the same.

This entry was originally posted at https://greerwatson.dreamwidth.org/107944.html. Please comment there using OpenID.

To me, turquoise is a cool, fresh hue that reminds me of water and the tiles you find in bathrooms and swimming pools. However, if you say "tiles" to any Forever Knight fan, they will immediately think of Natalie's office in the Coroners Building in Toronto.

The exterior views were filmed on location; but the interior was a permanent set. By positioning the camera behind whatever wall was broken away, it always looked a lot larger than it actually was, which—from the few steps needed for the actors to cross it—must have been pretty small. The most prominent feature was an autopsy table in the middle of the room, since Dr. Lambert (played by Catherine Disher) was a pathologist. But one corner had her computer and filing cabinets; and the opposite end had a lab desk; so it was by way of being a sort of all-purpose room that you'd never get in the real world. Let's just say that the series was done on a low budget! 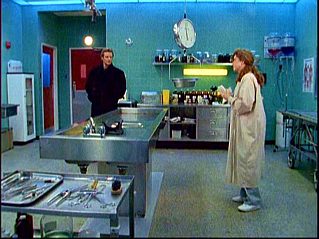 Most distinctive were the turquoise tiles that covered the walls from floor to ceiling.

Some years ago, when I was making icons for all the FK factions, I went through screencaps until I found one that had Natalie standing close to the wall. I carefully cropped out a tile, picking the one that the camera was pointed to dead on. As a result, the graphic "tiles" perfectly.

I promptly used it, in miniature, for the icon representing the NatPack, i.e. the faction for fans of Natalie. (Click on it to see it enlarged.)

However, I've also used the tile a couple of times when making webpages for stories that focus on Natalie in her role as pathologist, rather than her role as Nick's friend. The most recent is a ficlet, "Morgue Maniacs", that I wrote at the end of April as part of my attempt to keep busy while in lockdown. It features Natalie and her lab assistant, Grace, chatting on the night shift.

For its webpage, I complemented the authentic tile by bordering the central panel with nested tables whose most prominent feature is a band of coffee beans, representing the women's off-duty chit-chat. This came originally from GRSites.com; but I reduced it in size so that the detail could be seen in the relatively narrow width of the border. I trimmed it with ripply graphics that look a bit like turquoise ribbons bordered in gold, both derived from an original I got from 321clipart.com.

This entry was originally posted at https://greerwatson.dreamwidth.org/107748.html. Please comment there using OpenID.

This fifth Sunshine Challenge is for the colour blue. But what is "blue"?

I'm one of those people who sees a distinct colour between green and [what I call] blue. This intermediate colour has various names: printers call it "cyan"; and a lot of computer types very imaginatively call it "blue-green". Some people use the words "teal" or "aqua"; but, to me, these are more specific terms. (I'd use teal only for darker shades, and aquamarine for lighter ones.) To me, the general term is TURQUOISE, which is also what I'd name the focal hue, i.e. the ideal, perfect shade of the colour.

TURQUOISE lies between GREEN and BLUE:

So, from my perspective, in going straight from "green" to "blue", the Sunshine Challenge is leaving a colour out.

But opinions differ. Is TURQUOISE really a separate colour? When I was a little kid, it never occurred to me that it wasn't. I only realized that not everyone agreed when I was in the second half of Grade Four. It was the day when our teacher, Mrs Smith, decided to give us a lesson in colour terms.
( Collapse ) This entry was originally posted at https://greerwatson.dreamwidth.org/107409.html. Please comment there using OpenID.

As someone who likes green, I look at it in comparison with other colours, and I think it gets sadly short-changed. I mean, just consider this:

I mean, sure, we have names for the different greens. I'd call the lighter one "lime" and the muted one "olive". But they are still considered to be types of green. ( Collapse ) This entry was originally posted at https://greerwatson.dreamwidth.org/107179.html. Please comment there using OpenID.
Collapse